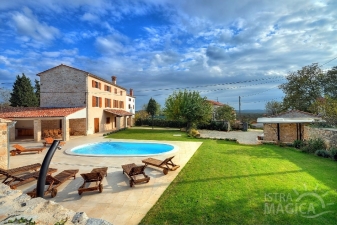 The Villa Moncalvo is in the small Istrian village of Golaš. Only 15 km from Rovinj, 5 km from Bale and 12 km from the coast, it is surrounded by vineyards, olive trees and Mediterranean scrub. Far away from mass tourism this luxury property awaits you. The property consists of a main house for 8 people and a separate guest house for 2 more people. The houses are arranged around the beautiful garden with a pool.

Built in 1900, the main house and guest house were restored in 2012/13 with great effort according to ecological principles. Particular emphasis was placed on the environmental impact of all building materials. In addition to the exterior masonry the existing wooden ceilings were preserved, restored and staged. The new furniture is made of local wood.

The 2000 square meter site is fenced with a typical Istrian stone wall. After passing the entrance gate you will see the on the left-hand side the 70 m² cottage that has a bedroom with two double beds, a living room with a stone fireplace, a stylish country kitchen and a bathroom with shower / WC.

On the right is the main house, which is followed by the outdoor area with summer kitchen. A contrast between traditional and modern forms of the large brick bread oven dating from 1900, which can be used for baking. Across a large wooden terrace you can reach the pool and another leafy terrace with mature trees.

On the ground floor of the main house is on the left hand the large, stylish, fully equipped country kitchen with a large table and direct access to the terrace. On the opposite side it is followed by a tastefully decorated living room with a large stone fireplace. A guest bathroom and laundry room are also available.

From the first floor another terrace with an original cistern is accessible.

From the upper floors, you have a fantastic view over the Istrian hills to the sea with the offshore island of Brijuni to the south and the red island in the north.

Bicycles for exploring the beautiful scenery and a shaded carport is of course available.

Fruit, vegetables, eggs, wine and grappa you can buy at the local farmers. Restaurants, bars and shops are located in the nearby town of Bale or in Rovinj. The beaches of San Polo and Colone can be reached by car within 10 minutes. Golaš is also a good starting point to get to know Istria. All attractions are easily reachable in a short time by car. On well-marked paths cyclists and hikers can explore the countryside.

On booking a deposit of 15 % of the rental price is required. The remaining amount is to be paid in Euro to the landlord on arrival or transferred to our bank account up to 14 days before arrival. Cancellation is possible free of charge up to 60 days before the day of arrival, but the deposit will not be refunded. After that 80 % of the rent is due, if the object cannot be further rented in the booked period. If there is a travel warning for Istria or a travel restriction due to COVID-19 during the travel period, cancellation is possible until 14 days before arrival. In this case, the deposit paid will be refunded in full. A security deposit of 500 EUR is to be paid to the landlord on handover. It will be refunded on departure, provided that no grossly negligent damage has occurred.